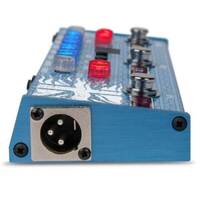 A true hands-on professional, Steve Harris not only formed Iron Maiden (in 1975!), he writes the bulk of their songs, plays multiple instruments, mixes recordings, directs and edits both live and production videos, and sings.

As if that wasn’t enough, Steve somehow finds time for British Lion, which he describes as a side project that’s more mainstream rock than metal.

And yet, he’s enviably humble.

Known for his galloping fleet-fingered bass lines, Steve’s distinctive style and tone have, and continue to be, required reading –whether you’re into metal or not.

Like Tech 21's other signature gear, the SH1 is not just for one single tone or genre.

The controls are designed to provide an expansive range of adjustment so you can dial in a wide spectrum of bass tones as well.

Building a hard-hitting bass tone is a breeze with the Steve Harris SH1 Signature SansAmp.

Each of its two channels includes individual Gain and Level controls for dialling in grit and volume — crank it, and you’ll experience a glorious woolly distortion that’s guaranteed to electrify an otherwise anaemic track.

Shape your bass tone with EQ and Blend controls

No matter what sound you’re imagining, you can create it with the Tech 21 Steve Harris SH1 Signature SansAmp.

A 4-band active EQ gives you near-unlimited sound sculpting with ±18 dB of boost and cut.

A Bite switch enables a “Steve” boost, infusing your low-end attack with extra clank and clarity.

Finally, there’s the Blend control, which enables you to go nuts with your tone and then mix in some of the unaffected DI signal for a more complex and coherent sound.

Run direct or feed your amp with killer bass tone

Once you have one, you’ll never be without a usable bass rig again.

That’s because the SH1 includes both 1/4" and XLR outputs. Want to feed your bass amplifier? No problem!

Depending on your amp, you can totally bypass your amp’s preamp and run the SH1’s output directly into its effects return.

Likewise, you can send your signal straight to the PA via the pedal’s XLR output.

And thanks to the parallel output, you can even do both, sending the affected signal to the PA while feeding your bass amp with clean signal for stage monitoring.