The One, the Only, the Original.

The Marine Band is the original blues harmonica.

Today it is still manufactured in much the same way as when it was first introduced in 1896. Its uniquely authentic sound has defined the role of the harmonica in the blues tradition and made it the benchmark by which all others are judged.

The archetypal blues harmonica with the traditional HOHNER tuning.

Originally conceived as a folk instrument, the Marine Band has had a considerable influence on the development of blues, folk, rock and pop music.

In the early 20th century, huge numbers of Marine Band harmonicas were already being exported to the USA.

Here they were eagerly adopted by African Americans, who discovered hitherto unknown playing techniques which enabled them to find their own new forms of musical expression on the instrument.

The music which today we call the blues evolved out of their work songs.

The blues would not be what it is today without the Marine Band harmonica, but it was not exclusively a blues instrument. This model was also the first choice of artists such as Johnny Cash, John Lennon or Bob Dylan.

The Marine Band became a true people‘s instrument and was played in every conceivable situation, from the back porch to the street corner to the concert hall.

It contributed to the success of countless hit records, TV and film themes and has even been immortalized in literature.

All Marine Bands are made in Germany 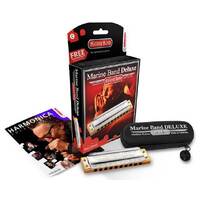